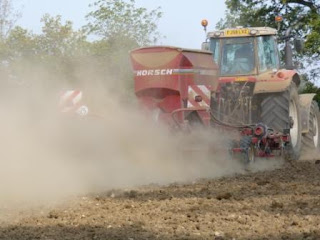 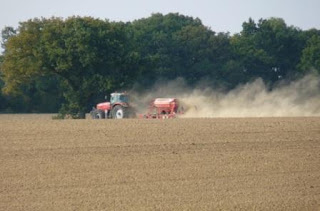 The Ley was power harrowed in early September and left for the weather to break down to create a good seedbed but an unforseen hot, dry September made the lumps of dirt even harder. So, last week the field was rolled and then power harrowed again to break down the clods and over the weekend was drilled with wheat. The temperature was an unseasonable 27C and as you can see from the photos, it was a dry and dusty job. The field was then rolled again.

Meanwhile on Sunday the contractors moved in to clear the muck heap and spread the manure on Lakes Field. This morning the field was too tempting for Morris our fox terrier and he had a long and satisfying roll. He now smells very rural.